Life as a Small-Town Music Therapist

Hello, BloomBender readers! Allow me to introduce myself – my name is Jordan Beck, and I’m a freelance writer living in the Upper Peninsula community of Escanaba, MI. Every month or so, I’ll be writing blog entries for the site on a variety of topics related to music therapy.

BloomBender is all about helping people make connections within themselves and in their local and global communities. With that in mind, Katie asked me to write about someone we both have important connections to – my mother, Kim Beck. Back in the day, Katie job shadowed Kim to learn more about working as a music therapist. This profile is inspired in part by Brad Bender, who taught his kids (including Katie Bender, MT-BC) to be involved and give back to the community.

After reading this, you may want to take a moment to ask yourself: who helped you get where you are today? 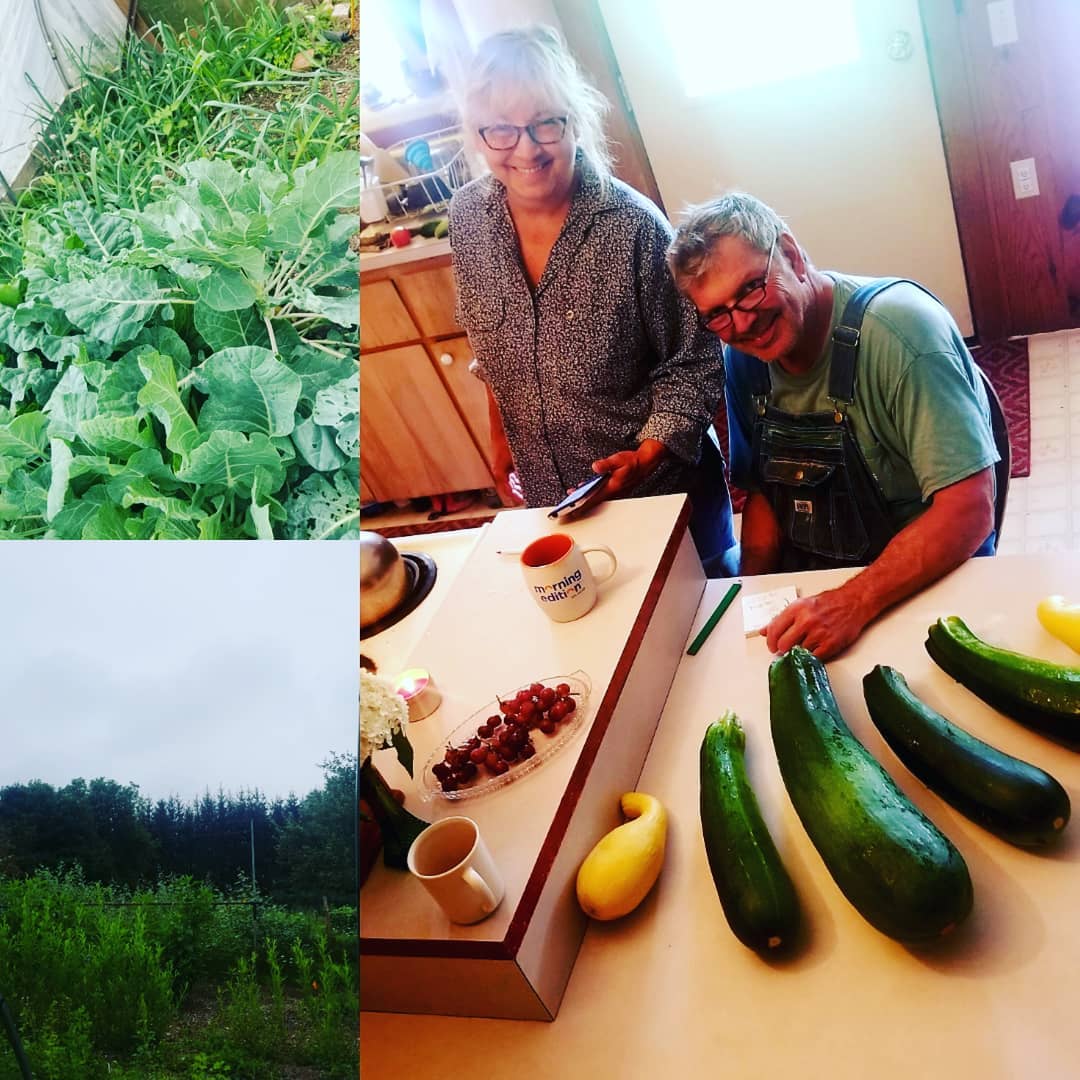 Cynthia and Brad Bender and produce they grew summer 2020.

“I was thinking about what I wanted to do with my life and I knew I really loved music, but I always suffered a lot from performance anxiety, so the idea of being a performance major or even an education major – which also involves some degree of performance – didn’t seem like an ideal fit for me,” she said.

During a lesson, Kim’s piano teacher Ruth Chown brought up the field of music therapy, which she hadn’t heard of at the time. The idea of using her musical talents in a therapeutic context appealed to her, and she soon decided to pursue a career in the field.

Kim attended Western Michigan University from the fall of 1984 to the winter of 1987. In 1988, she had an internship in Milwaukee, got married, and came back to Escanaba. Around that time, she began teaching piano lessons, as there were no music therapy jobs in the area. “I was still interested in pursuing music therapy. I just wasn’t quite sure how to go about that,” she said.

Eventually, opportunity knocked. A friend of Kim’s whose son had autism heard she had studied to be a music therapist and requested a music therapy assessment for her son from the Delta-Schoolcraft Intermediate School District (DSISD).

Later, Kim began offering one-on-one therapy to her friend’s son through the DSISD. Then, an early childhood teacher at the Learning Center - a DSISD-run school in Escanaba for students who have special needs - pitched the idea of having her provide music therapy services to the school’s administrators. She was soon hired to serve Learning Center students in a group format, and she’s been working there ever since.

Art by Katie Bender and Khalil.

In her time at the Learning Center, Kim said she’s learned a great deal about working as a music therapist. One of these lessons has been the importance of flexibility in her sessions – while she works hard to prepare lesson plans, she’s found that developing the ability to switch gears when these plans aren’t working has been just as important. Most importantly, however, Kim has been inspired by her students. “I became a music therapist so that I could help others by sharing the gift I had been given, but the truth is, I get so much more back than I ever give,” she said.

Kim encouraged aspiring music therapists to volunteer or job shadow with people working in the field – just as Katie did years ago through the DSISD’s collaboration with Escanaba Area Public Schools’ orchestra program. “It’s always wonderful to have another set of hands and extra musical support,” she said about the time Katie spent job shadowing.

Aside from this, Kim advised new music therapists to take their musical development seriously. They should be comfortable enough in their ability to play guitar and piano that they are able to focus on the connection they’re making with their client through the music.

Of course, both fledgling and experienced music therapists have been in unfamiliar waters since early 2020. The COVID-19 pandemic has transformed all aspects of daily life – education among them. “It was really hard when we closed school down. I cried that day, because I just know how important school is for our students,” Kim said.

During the final months of the 2019-20 school year, Kim participated in a few teletherapy sessions via Zoom with her older students. For younger classes, she recorded videos of some of their favorite songs.

As of late August, Kim was gearing up for the start of the 2020-21 school year at the Learning Center. Pandemic-related precautions were not the only changes she had to adjust to – the school was moving to an entirely new building at the start of the semester.

Due to COVID-19, students at the Learning Center will be staying in their classrooms as much as possible. Kim said she would likely have to bring a cart with instruments and other supplies to her classes. “I’m going to have a new classroom that I most likely can’t do therapy in,” she said.

That said, she believed she’d be able to hold some outdoor music classes to give her students a chance to sing. She was also working to come up with songs to teach her students about precautionary measures such as mask-wearing and hand hygiene.

While COVID-19 has obviously created new challenges, Kim said it’s also given her some unexpected opportunities to develop as a professional. Since the pandemic started, she’s joined some Zoom groups for music therapists.

“As far as I know, I’m the only practicing music therapist in the Upper Peninsula, so it’s been super helpful to be able to network with other music therapists and find out what everyone’s been doing,” she said. Still, working during the pandemic has been anything but easy – especially in a field built almost entirely on personal connection. “We’re all kind of grieving some of the changes. Music therapists have said they’re not allowed to sing, and some can’t even use instruments – some are completely remote,” Kim said. Kim has been dealing with the situation by maintaining the same healthy work/life balance she had before COVID-19 arrived. She said she tries to keep God first in her life, followed by her family and her job. “I think if I can keep that perspective, for the most part, things tend to balance themselves out,” she said.

Thanks for reading my first blog entry for BloomBender! I’ll be back with another article soon. In the meantime, you can visit my website or send me an email at jordan@jordandbeck.com.

A First Look at the Manzanita Tree Project